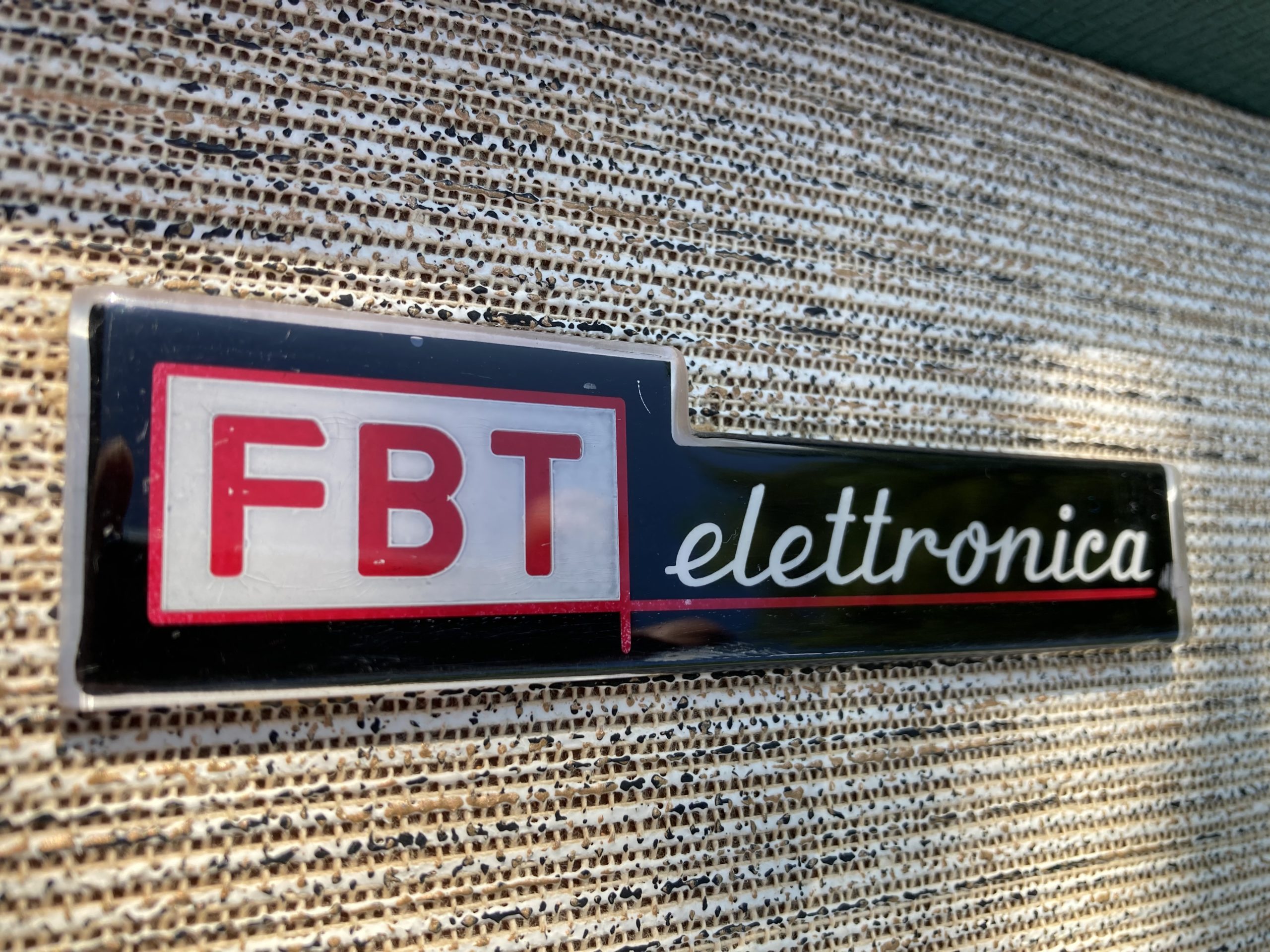 “Honey, I shrunk the guitar amp!”

It wouldn’t really have surprised me if someone would have said that, when I first checked out this little Italian guitar amp. It reminded me a lot of a miniature version of the Gretsch 6162, that’s why!

Both are small twin amps from the same era (1962-1963). The FBT features 8-inch loudspeakers, whereas the Gretsch has somewhat larger 10-inch cones. Power and output transformers of both amps are mounted to the bottom of the cabinet, separate from the main chassis and connected by a cable tree. They both have quite neatly laid out electronics too, soldered to a tag board. Quite different from, say, Gibson amps from that era… Might the FBT have been inspired by the Gretsch 6162, or other Valco-built amps from the US?

Let’s focus on the little FBT amp itself however. It was brought to Cosmic Ampworks by someone, of Italian origins actually, who had earlier procured a Carmelo Catania Era IV. The amp actually only needed a Euro-cord connector installed, and the owner figured that doing so might present a nice opportunity for a blog… and one should never let a good opportunity go to waste! 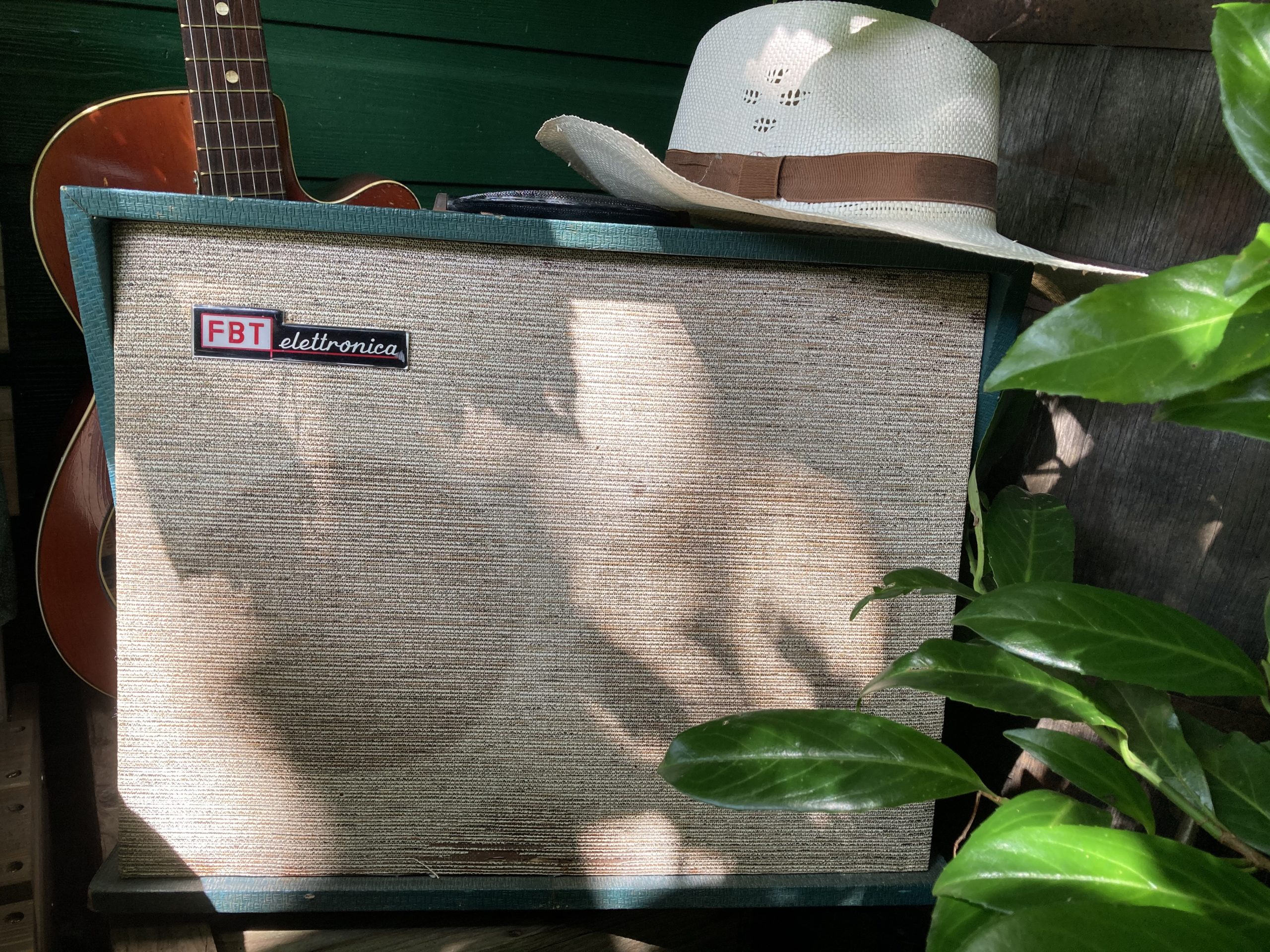 The 1963 FBT amplifier together with its contemporary fellow countryman (or countrylady): a 1962 Catania Carmelo Era I.

Finding out more about FBT

Surely, that beautiful little “FBT elettronica” badge on the front of the amp sparked my curiosity. So, before starting to work on the amplifier, I spent some time searching for information. Not expecting to find much, I was delighted to find that the company is still alive and kicking! Situated in Recanati Italy, a name that’s also printed on the FBT’s speakers, the company now focuses on producing professional audio equipment and sound systems. It is also the Italian distributor of brands such as Sabian and Crafter. The website further mentions that FBT was established in 1963, so our little twin amp was probably one of its first products. You can also conclude this from their very nice 2013 corporate video (featuring Alan Parsons!), where you can see a similar amp. 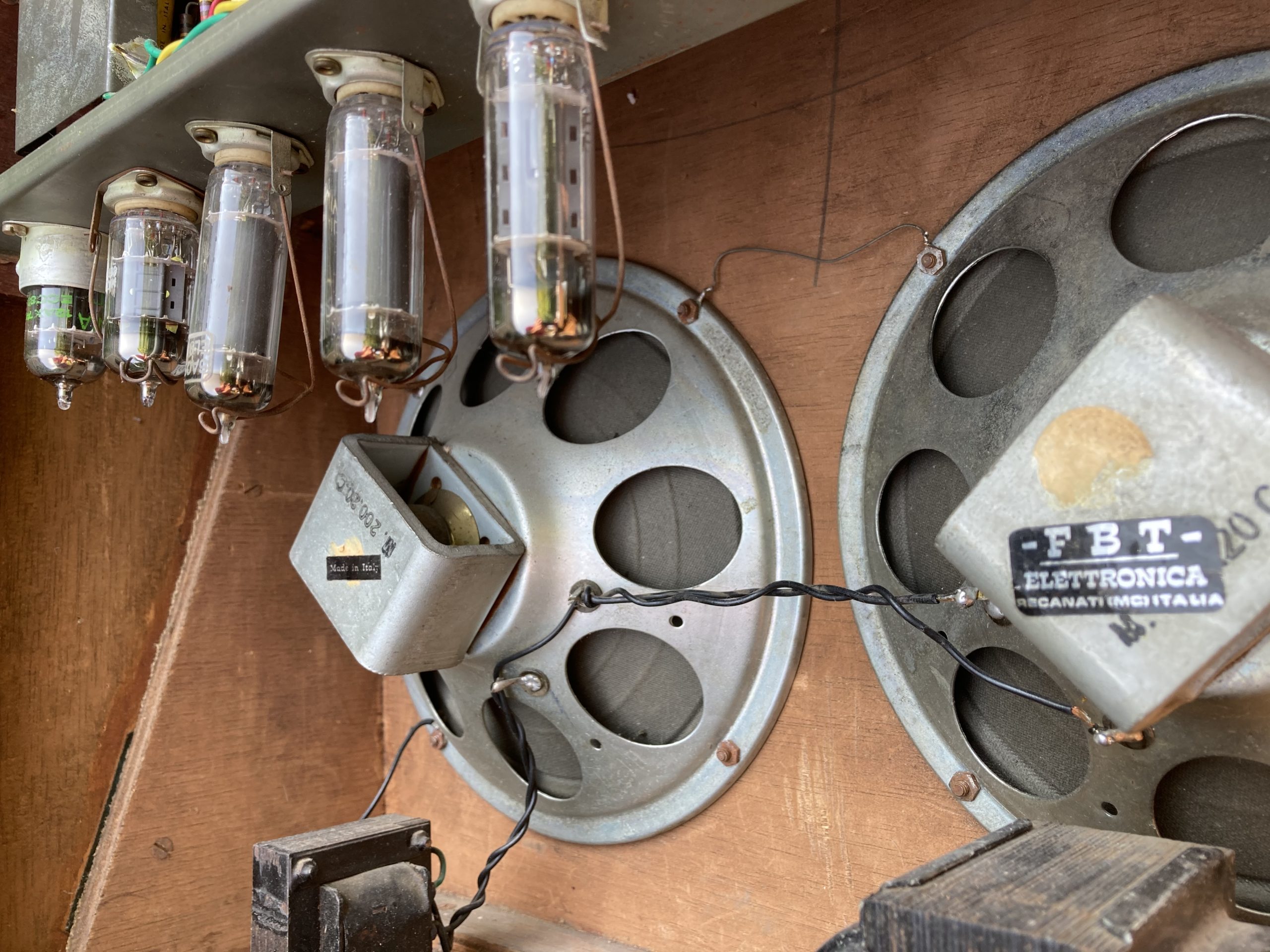 A peek in the back of the cabinet. The two speakers are branded FBT Elettronica, Recanati, Italy. Also visible are the transformers and the tube complement (from left to right: 2 x 12AX7, 6X4 rectifier and 2 x 6AQ5). The rectifier and the power tubes have 7-pin miniature socket, whereas the preamp tubes have ‘regular’ 8-pin sockets.

Given a personal interest and (modest) experience in entrepreneurship and innovation, I find it a heroic and amazing achievement to start a small business by designing and building some guitar amplifiers in a small town, and then turning it into a thriving factory, which still flourishes 60 years later, in spite of all the competition from Southeast Asia. In fact, it reminds me of famous words spoken in Cesena, a town less than 100 km from Recanati, in 2015 (check out the video below):

“You know, Italy is a country where dreams don’t easily come true. But it’s a land of passion, and creativity!”

Surely, passion and creativity can make dreams come true (the Foo Fighters playing in Cesena!) and have made FBT into what it is now. At a time when seemingly anyone can put together a cheap amp, passion, creativity and local traditions remain perhaps the distinguishing factors to create a strong brand.

On a sidenote, it actually seems that FBT is at this moment no longer manufacturing any guitar amplifiers, but it did so until fairly recently. From 2006-2012, FBT collaborated with Cicognani Engineering, to produce some of its designs. This included the world’s first high gain low power head, Brutus, the design of which reminds me a bit of Italian sports cars. Surely Cicognani is another company fueled by passion and creativity! Lastly, one can’t help but hope that FBT may soon develop some plans to re-enter the guitar amp market. 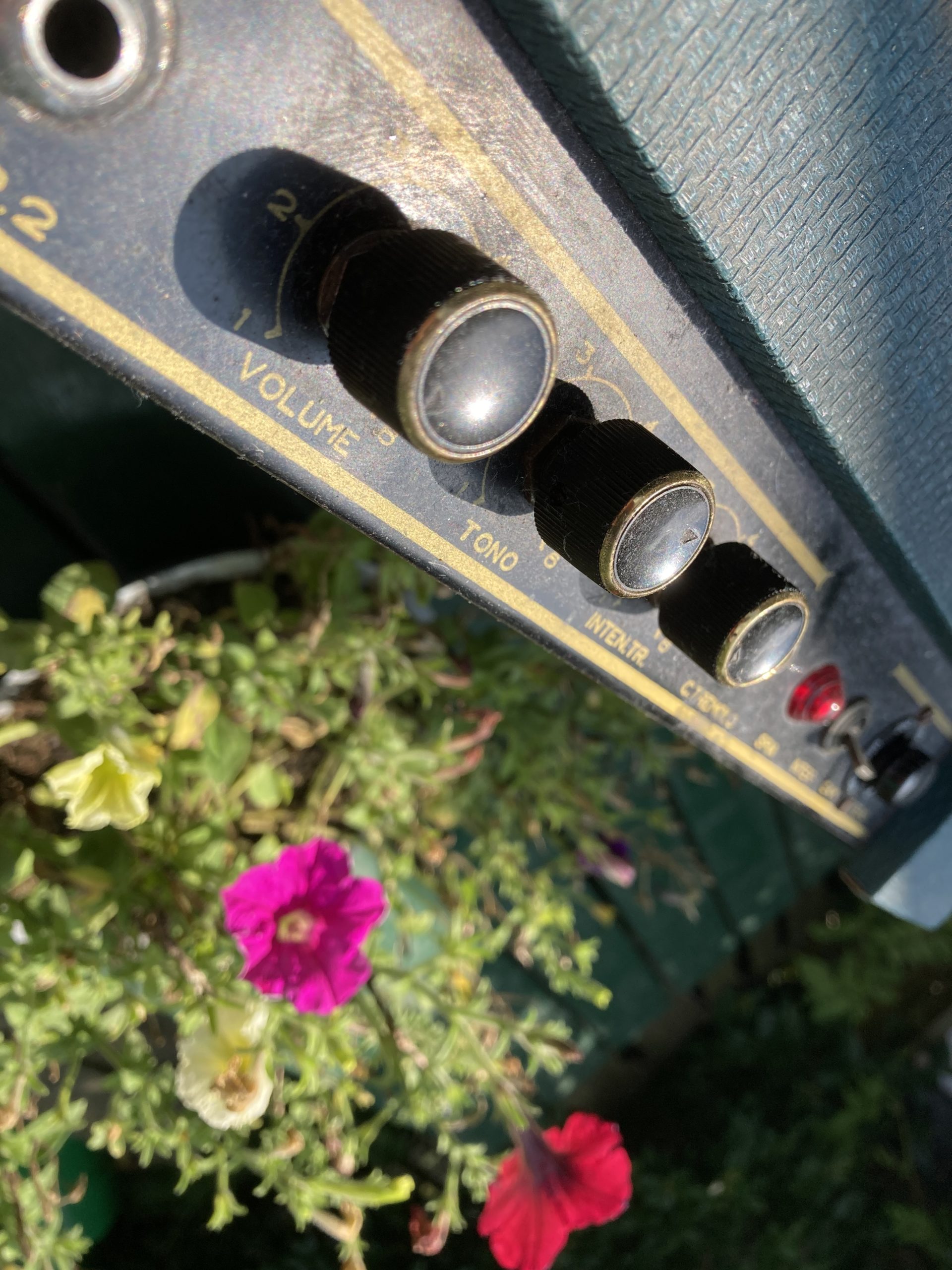 A view at the controls. Work on the FBT was done in a relaxed state of mind, in the garden.

Hooking up the Euro-socket was quickly done, as a previous owner already had already nicely mounted it to the back panel of the cabinet. So, it was just a matter of soldering the power and ground leads to it, and applying some shrink tubing. As an additional safety measure, I decided to install some wire mesh across the back. You never know where an amp ends up! It was actually a relieve to me that it required no further work, as my time was very limited, just before the summer holidays. I looked forward to just relaxing and playing a bit of guitar through the FBT, to find out how it sounded. 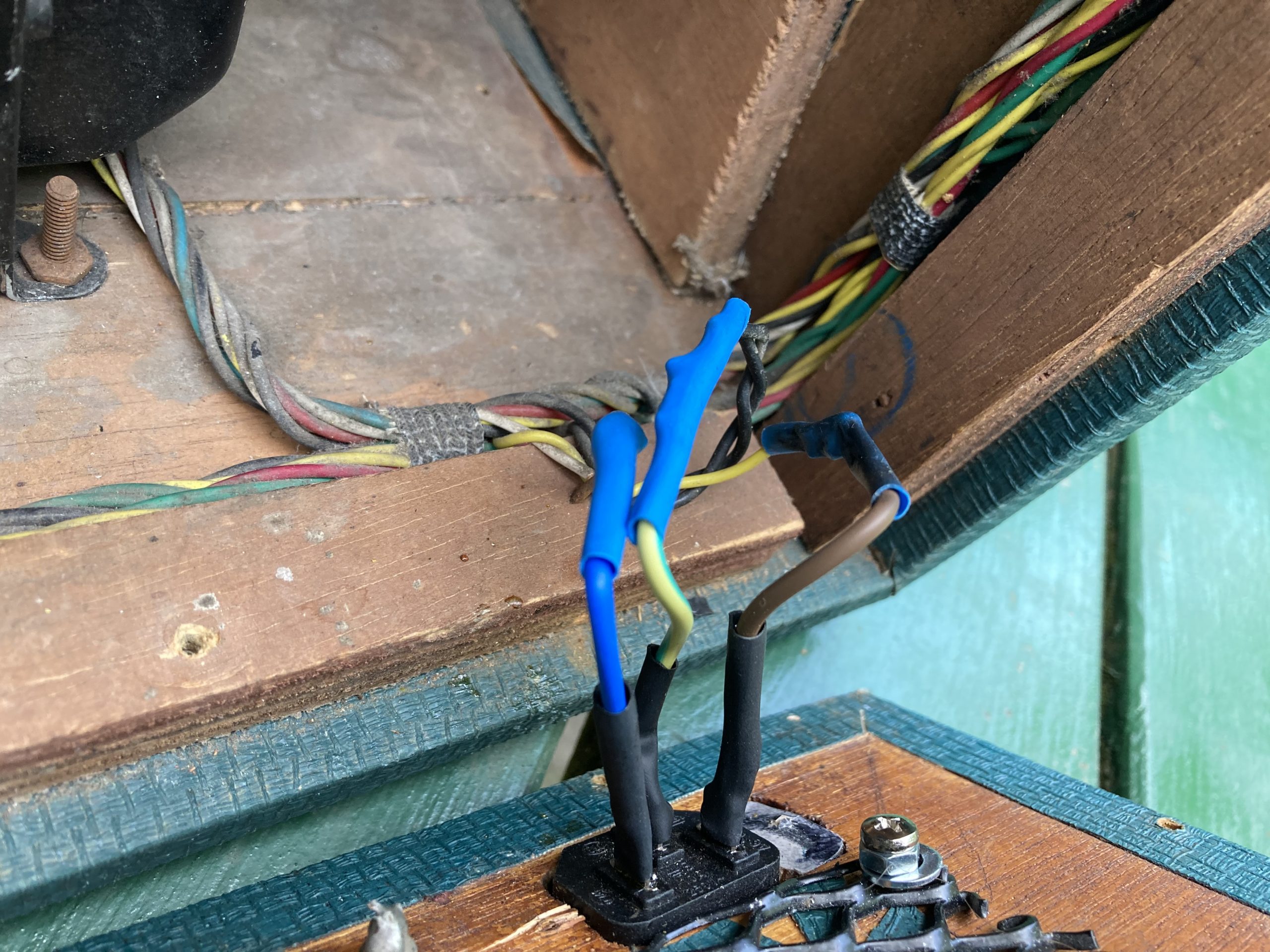 The Euro-cord connector hooked up. Part of the wire mesh that was mounted for added safety can also be seen.

The first thing that struck me when I fired it up were some annoying spluttering and crackling sounds… Something that I hadn’t noticed when I briefly tried the amp before! I happen to have a very low tolerance level for hum and other noise, so this kinda spoiled the fun for me. I sent the owner of the amp a message, asking him what to do. “No worries, take your time to fix it, I’m not in a hurry”, he let me know. Luckily, during the summer holiday, I found some time to have a closer look at the amp, in a more relaxed state of mind. My only worry was that the problem might be difficult to find, given my observation that over the years, many makeshift repairs had been made to the amp. 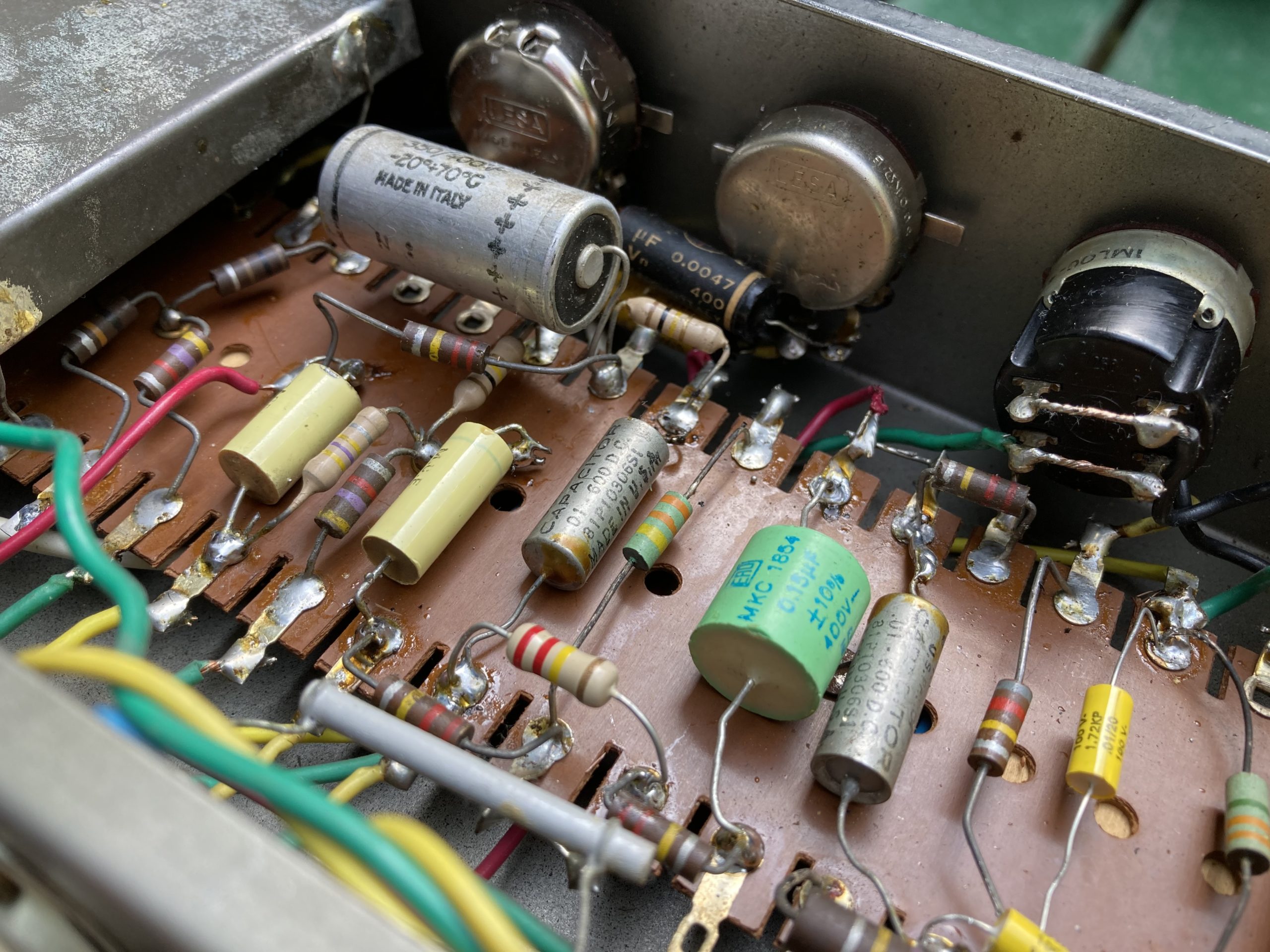 The circuit board in the state that it arrived in. Obviously, there was some suboptimal soldering done in the past. Also, the Sprague Vitamin Q capacitors can be seen (the two metallic-colored cilinders, labelled ‘capacitor’ in the center of the picture). More about those in text below.

To find the problem, I pulled the first preamp tube (V1). No difference, still a lot of noise. Then the phase inverter (V2). Still no difference. My conclusion was that the problem should be in the power amp. I pulled one of the two 6AQ5 tubes (European designation EL90, equivalent to 6V6GTs, but with lower maximum ratings), then put it back and pulled the other. Removing one tube almost fixed the problem, whilst removing the other made no difference. Would the problem be one of the tubes then? I swapped them and repeated the exercise, concluding that that wasn’t the case. So, the problem could be in the input signal of the power tubes. I disconnected the coupling capacitor (to the phase inverter) from the grid of the noisy tube and… HEY! That cured the problem! 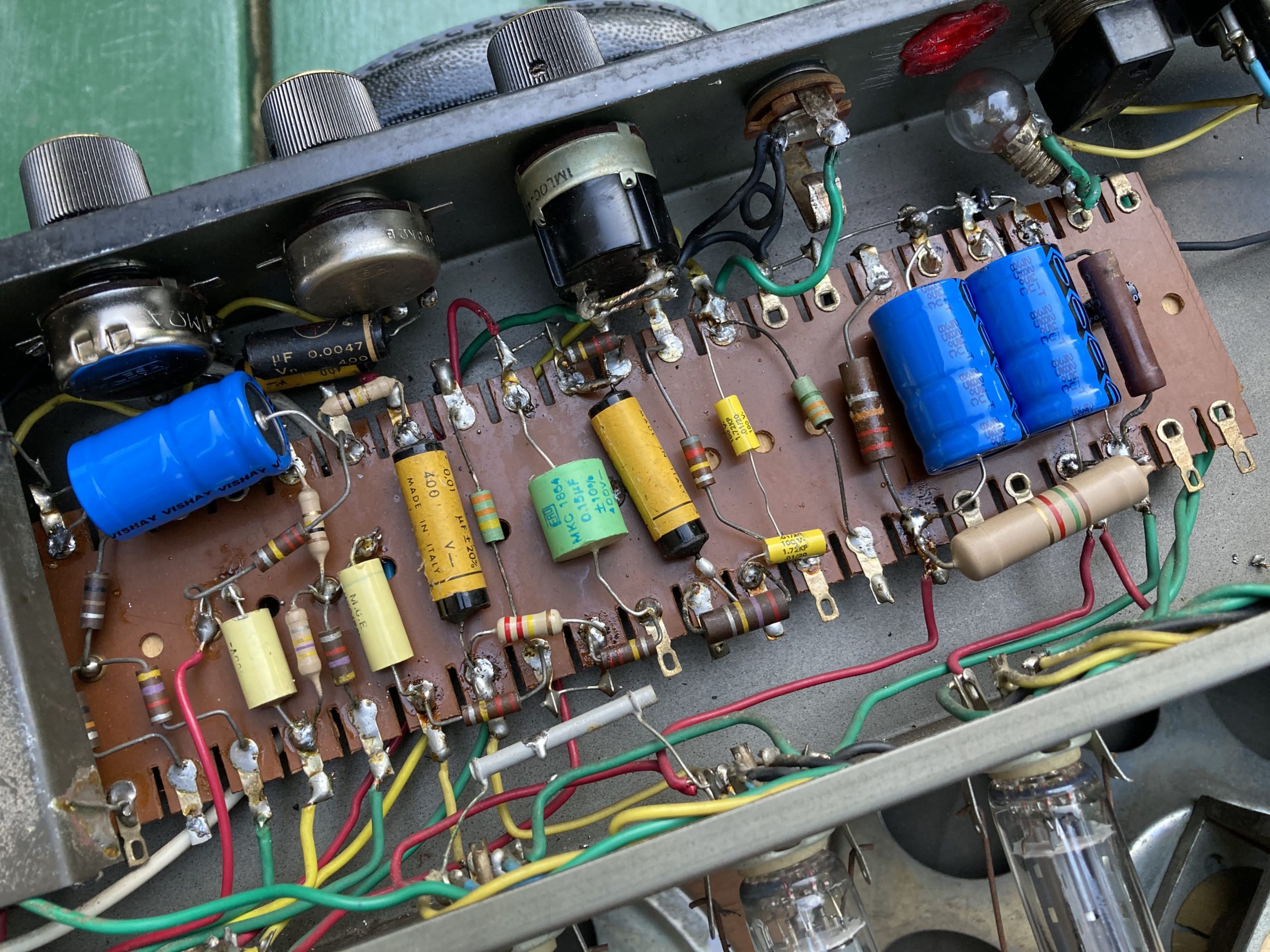 Problem solved! In comparison with picture above, it can be seen that not only two coupling caps have been replaced, but also the three filter caps (blue). They are closer to their original capacitance values now. Also, take a look at the simple but effective way of mounting the pilot light, which happens to be an old-fashioned bicycle light… factory-spec?

Actually, the faulty cap was a vintage Sprague Vitamin Q. It must have intermittently let jolts of V2 plate voltage arrive at the grid of the power tube… causing voltages in the whole amp to jump up and down! Vitamin Q military grade paper in oil caps are popular among audiophiles. Someone must have considered them an upgrade from the original Italian caps, which came with the amp in a little plastic bag. Those original caps were, interestingly, branded “Ducati” (speaking of passion and creativity) and they had been removed them by just clipping their legs. Nevertheless, I managed to reinstall them, bringing the amp a bit closer to originality. 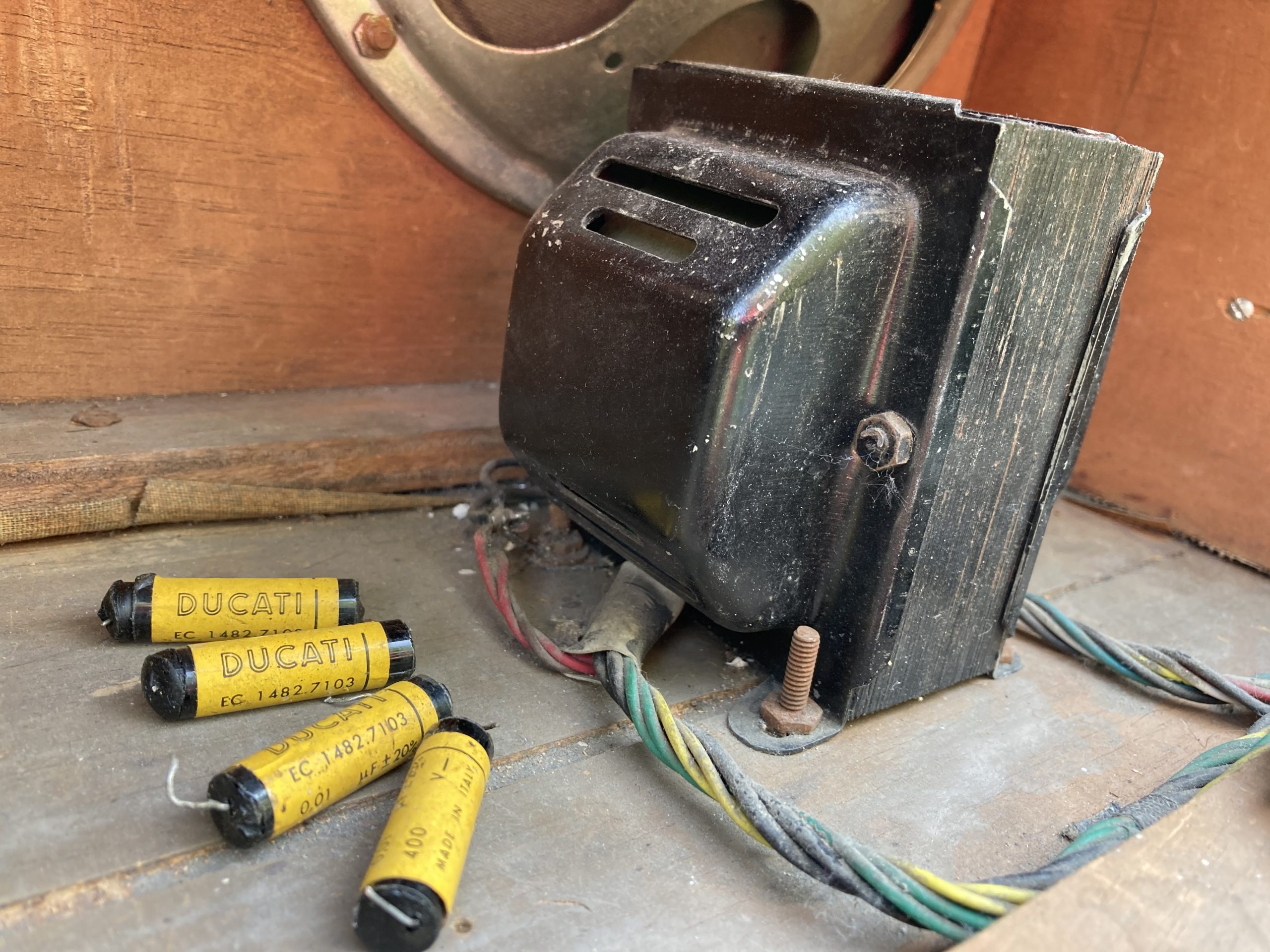 Ducati-branded capacitors remind one of another passionate and creative Italian brand. Someone replaced them with Vitamin Q capacitors and clipped their legs. Nevertheless, two of them were put back in place.

Finally, it was time to play some guitar! The amp sounded very good to me, with detailed treble, nice blooming tones and a delicious punchy attack. Also, some nicely overdriven tones at relatively modest volumes, probably due to the inefficient vintage speakers. These small speakers cause the bass to sound a bit boxy too, which makes the amp mostly suitable for single coils or bridge humbuckers and (classic) rock or sixties-oriented music. Without an external speaker, that is. It would also make a great recording amp. Really a nice alternative perhaps to a Tweed Deluxe or 18W, and an interesting amp to get to know a better over time! Viva Italia! Grazie mille! 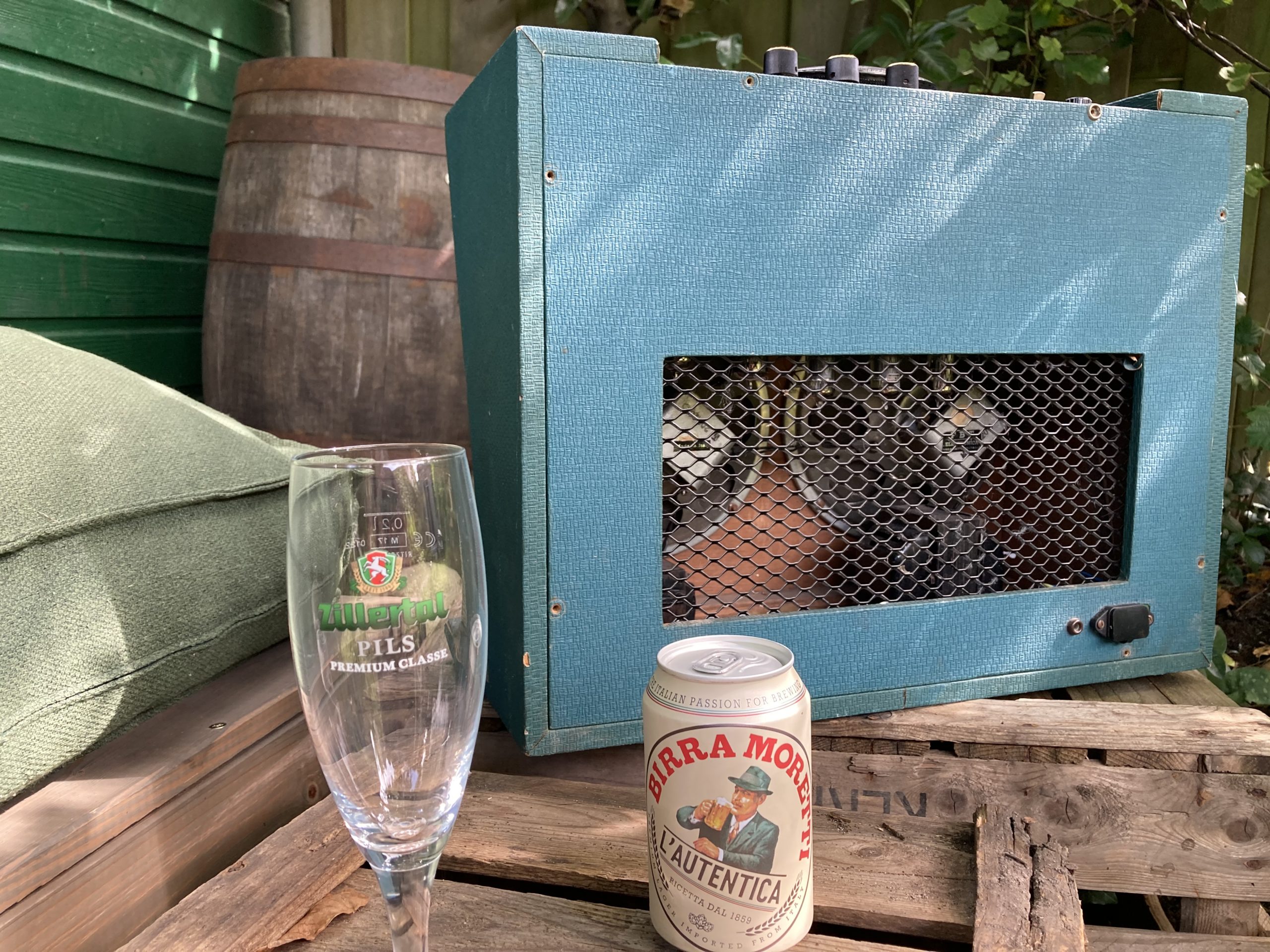 Glad to hear that you appreciate our blog, and nice to hear something back from @FBTelettronica!!

Thank you for the wonderful memory!

Fifty years after their debut, the Band Of Gypsys remains a towering achievement in the stunning, all-too-brief career of #JimiHendrix. Here’s a brief look back at how it all came together for one magical 'message to love.' Read more at https://bit.ly/342SD5U

“The Georgia-based company – which already manufactures #tubes for its ultra-premium hi-fi equipment – is asking customers which #tubes they'd like to see manufactured in #America”. #tubeamp #guitaramp #amplifier #hifi