What’s your first association with the name Gretsch?

Maybe the Stray Cats megahit “Rock this Town”? Or a Gretsch-slinging guitar hero, like Chet Atkins or Malcolm Young? Iconic axes like the White Falcon or the 6120 Western Orange? Lots of possibilities, but few probably think immediately of Gretsch’s guitar amplifiers… or is it?

Gretsch amps certainly have their following  though. Take the posh Gretsch G6163 Executive, which is featured on the front cover of “365 Guitars, Amps & Effects You Must Play” by Dave Hunter (2013). Out of 365 options, that very Executive – accompanied by a White Falcon – was selected!

Oh, but wait… did you just say that the White Falcon was selected and that the Executive was just chosen as its humble companion?

Anyway, run a quick web search for “Gretsch Executive”, or “Gretsch Playboy”, and you will find out that there are actually two different versions of these amps. Brown vinyl versions, with arrow-shaped speaker grilles, and similarly-named models that came in grey “rhino-hide” tolex. The latter have a speaker cloth that elegantly folds around the righthand edge of the cabinet. These two versions obviously differ from each other in many respects. There is one thing they have in common though: neither of them was ever built at the actual Gretsch factory! The brown versions were Fender-inspired and built by Victoria amps in the USA, in 2005 and a couple of years thereafter. The grey rhino-hide versions were built at Valco in the 1960s – this blog is about one of those: the Gretsch 6162. 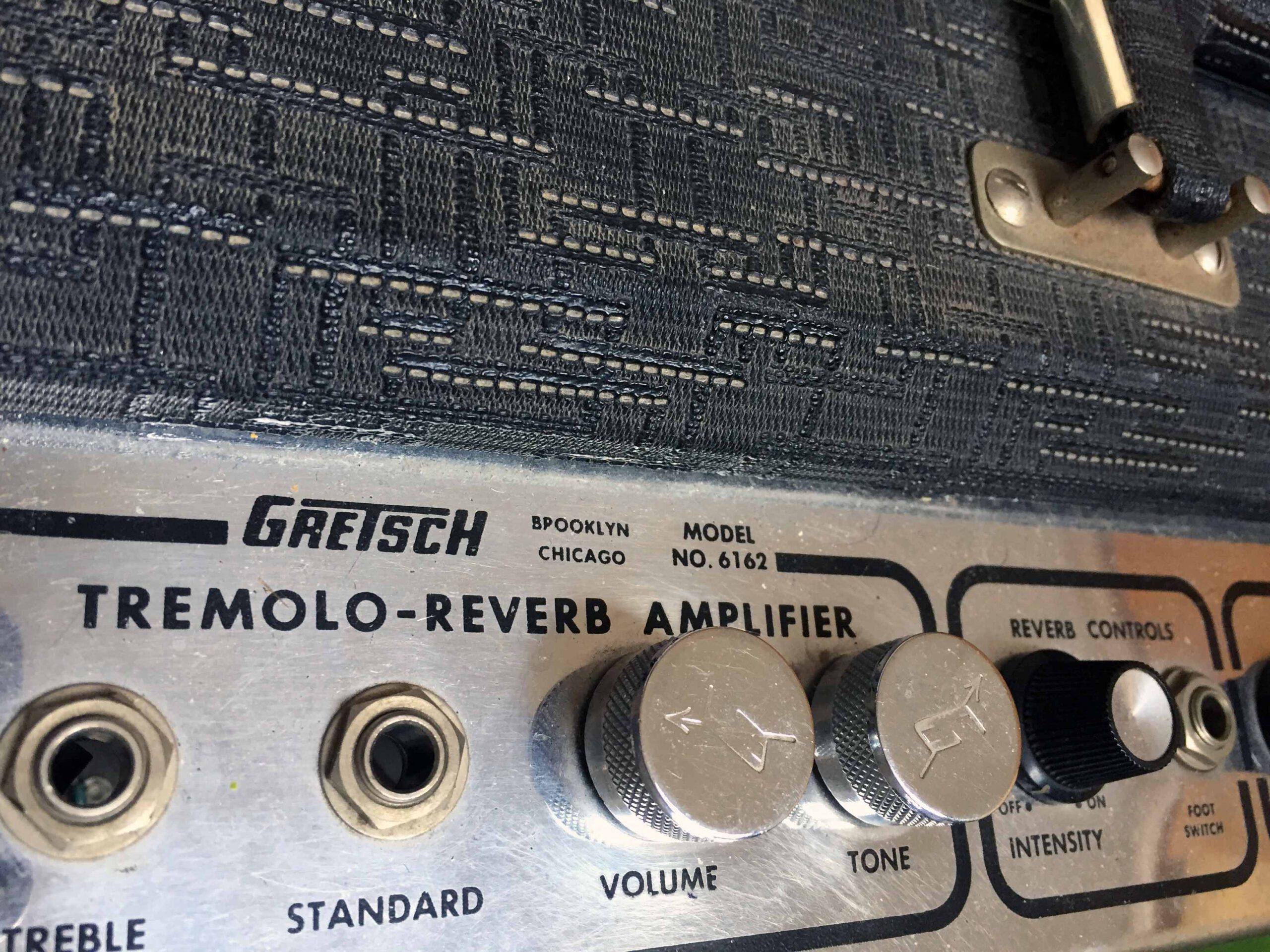 Part of the control panel of the Gretsch 6162. The Gretsch company itself was located in Brooklyn, New York but amp maker Valco was in Chicago.

Valco was a musical instrument manufacturing company based in Chicago, that built amps for Supro, Gretsch and many other brands back in the day. Established in the 1940s, it already had become the third largest amp manufacturer in the US in the 1960s… only to file for bankruptcy in 1968. In recent years, Valco-built amps have become increasingly sought after. In part, undoubtedly, because Jimmy Page is known to have used them in the recording studio. Which amp(s) did he use exactly?! That may forever remain shrouded in mystery. The good thing is that Valco used the same handful of circuits in a range of amplifiers, manufactured not only for Supro, but also for Gretsch, Airline and others. So, you can probably approach that Jimmy Page tone and feel with a vintage Gretsch or Airline too! Many think Page recorded with a 2 x 6L6 powered Supro Thunderbolt. However, if there’s one take-home message from Jimmy Page about recording, then it is probably that one should  record big sounds with small amps! Therefore, others think Page used smaller 17 Watt amps, powered by a duo of 6973 tubes. 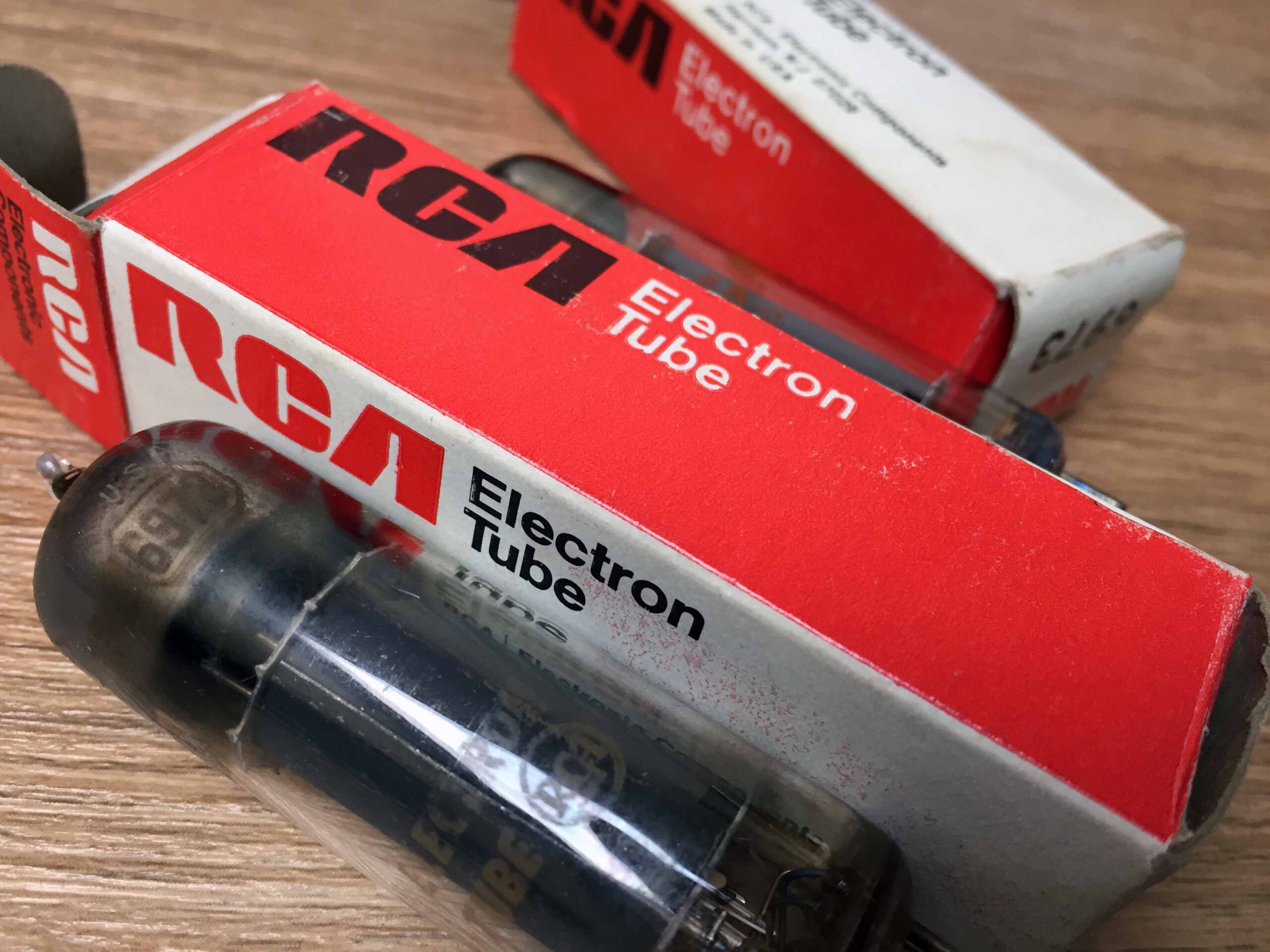 Those 6973 tubes were a Valco favorite for many years. They look like EL84s, but can handle higher plate voltages and put out more power. They were often used in jukeboxes too. Dave Hunter (2013) describes their tone as “punchy and broad in the clean range and barky and thick when cranked up”. Also, he mentions, they are “grittier” than EL84s.

“Punchy, barky and gritty” is actually a spot-on description of the Gretsch 6162. Lacking a fancy-pants name such as “Executive” or “Playboy”, the 6162 was simply baptized “Dual-Twin with Reverb”. Dual for two channels, and Twin for its duo of 10” speakers. Hmmm, but wait… the 6162 has only one channel? Below page from the 1965 Gretsch catalog shows that its cousin, the 6161 Dual Twin, did have two channels (4 inputs). To create space for the additional features on its control panel, it seems that in designing the 6162, one channel was sacrificed. The catalog’s claims of “17 Watts of Undistorted Output Power” might be considered slightly optimistic too, but in a beneficial way… 6973-powered Valco amps are now considered the epitome of garage tone! 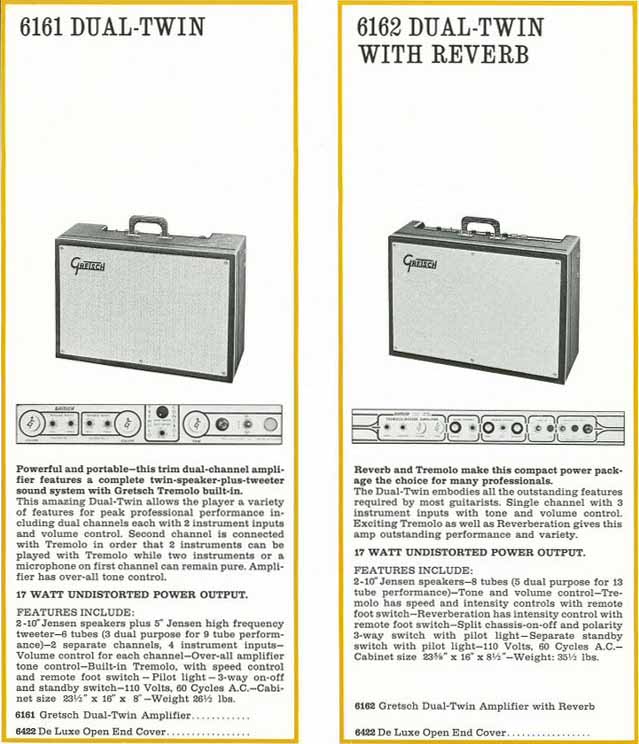 One can also have too much of a good thing though. The prime suspect of this blog was initially hardly capable of producing any clean tones at all. Particularly with humbucker guitars, it already distorted at civilized conversation volumes, and below. Only by turning the guitar volume way down and the amp’s volume all the way up would it be possible to produce some clean tones, at the expense of treble. So, the owner, a befriended guitar player, lent me the amp for a while, to see what I could do about this. When he first demonstrated it, I also noticed a loud hum that was far above my tolerance level. Another concern that the owner mentioned was that unique reverb of the 6162… which basically sounds like playing guitar in the shower! Very short reverberation. Knowing that that sound is produced by a vintage Gretsch amp may make it sound cooler, but an ignorant audience might just think that your reverb sounds crappy. 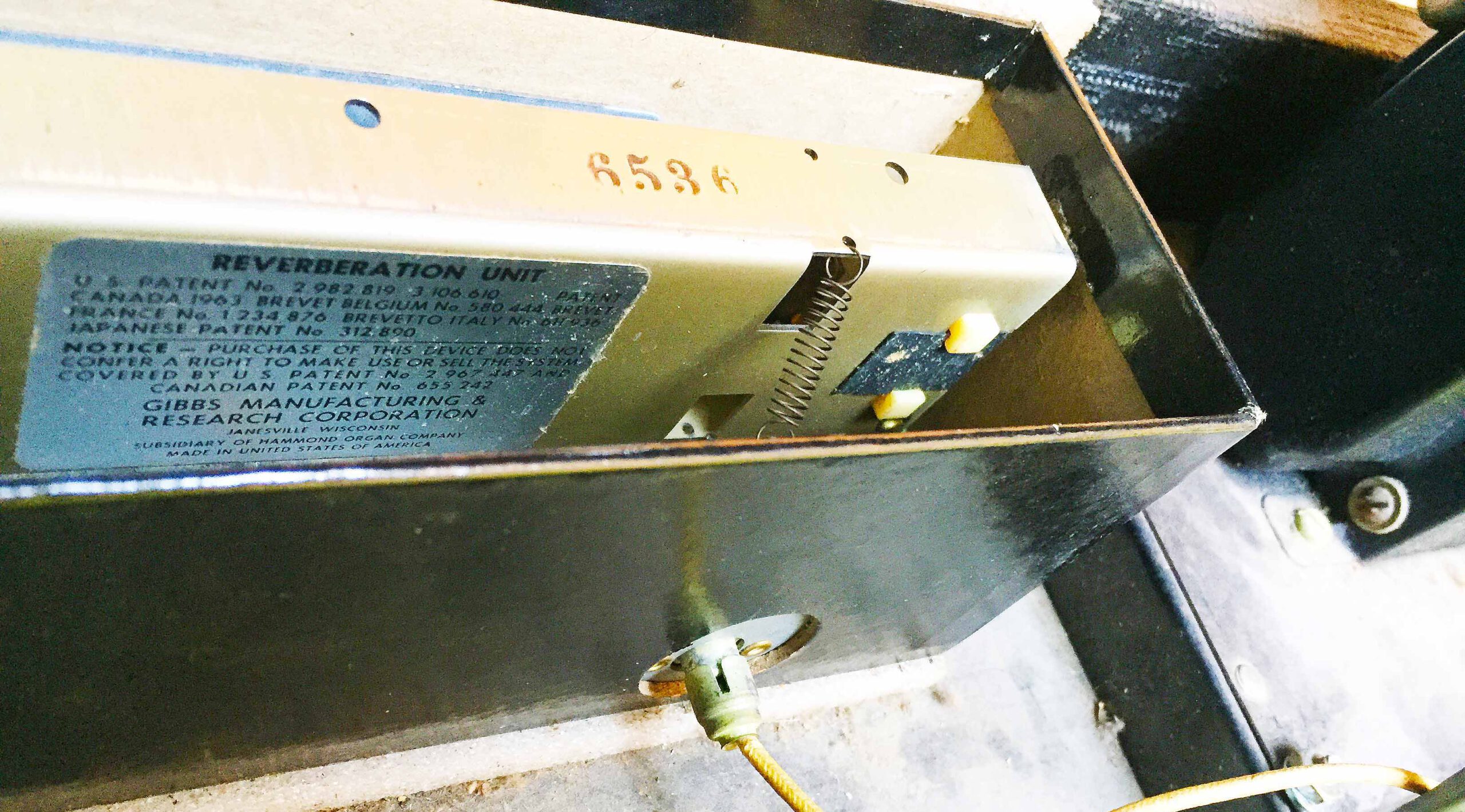 The Gretsch 6162 features a spring reverb that is suspended in a cardboard box on the bottom of the cabinet. It was produced at Gibbs Manufacturing & Research Corporation in Janesville, Wisconsin. Gibbs was a subsidiary of the Hammond Organ Company. In 1971, reverb production was moved to another Hammond subsidiary: Accutronics in Geneva, Illinois. The power amp chassis and transformer can be seen in the righthand corner.

Where to start with this amp? Its complete lack of headroom could be caused by deteriorating filter capacitors. The fact that distortion mostly occurred in the bass frequencies seemed to support that conclusion: amplifying bass draws a lot of power and apparently, the filter caps couldn’t keep up with that anymore. Severe power sag when strumming bass strings was the consequence. However, the owner had indicated that he didn’t feel like replacing the filter caps yet. I agreed, because the amp was still functioning and completely original. A less drastic approach would be preferable.

The question was where the excess overdrive came from – preamp, power amp, or both? Luckily, the 6162s construction, with separate chassis for preamp and power amp, allows for easily connecting a guitar directly to the power amp. Already, plenty of overdrive could be heard when doing this! If a power amp has so little headroom with a guitar directly connected to it, what’s the point of having a preamp then, apart from some tone-shaping? Probably things were originally not like this. After first having checked the phase inverter 6EU7, a simple solution presented itself in the observation that the cathode-bias resistor for the 6973s was not bypassed with a capacitor… a rare thing! A suitable bypass cap was quickly grabbed from the parts department and soldered across the legs of the cathode bias resistor. Voila, increased headroom and… bark! An entirely reversible fix too. 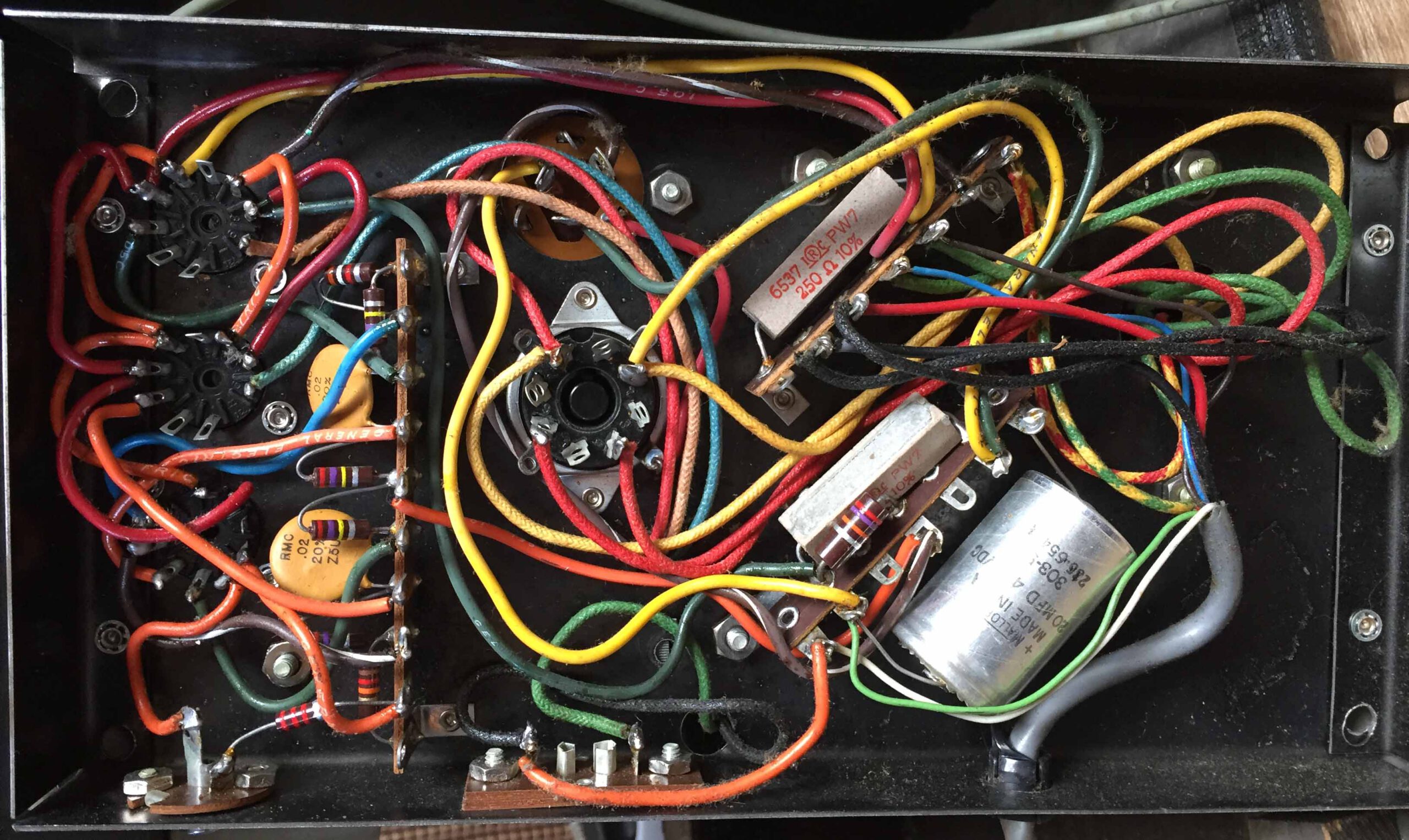 A peak underneath the power amp chassis, which is mounted to the bottom of the cabinet. In the center the 5U4 rectifier. The two 6973 tubes can be seen in the upper left. The lower left tube is the 6EU7 phase inverter. For more headroom, a cathode bypass was mounted in parallel with the upper large resistor in the center. In the lower right, the multpi-stranded cable that runs to the preamp (grey) is visible.

Toning down the preamp

Let’s shift our attention to the preamp. Really not a lot of gain is needed from this department to overdrive that power amp – at least not with those old filter caps. Checking with an oscilloscope also revealed that the first preamp stage already overdrove the second stage at low volume settings. Difficult to dial in a cleaner tone! We could do with a little less gain here. Therefore, the cathode bypass cap of V1 was removed, to reduce gain by 40% or so. Exactly the opposite of what was done in the power amp! Theoretically, this change might yield, as a side effect, some loss of harmonics. It wasn’t noticeable. The amp just became easier to manage and much more enjoyable to play, although that is a somewhat subjective notion. More objective is the fact that it now seemed to have just the right amount of grid, bark and volume for playing a band.

One thing that I particularly liked about the exterior of the 6162 were those two neon pilot lights – they’re just so much cooler than a normal light bulb or LED! No wonder that the 1965 Gretsch catalog explicitly mentioned them. Imagine my surprise when I found out that the standby light was a major contributor to the 6162s hum issues. 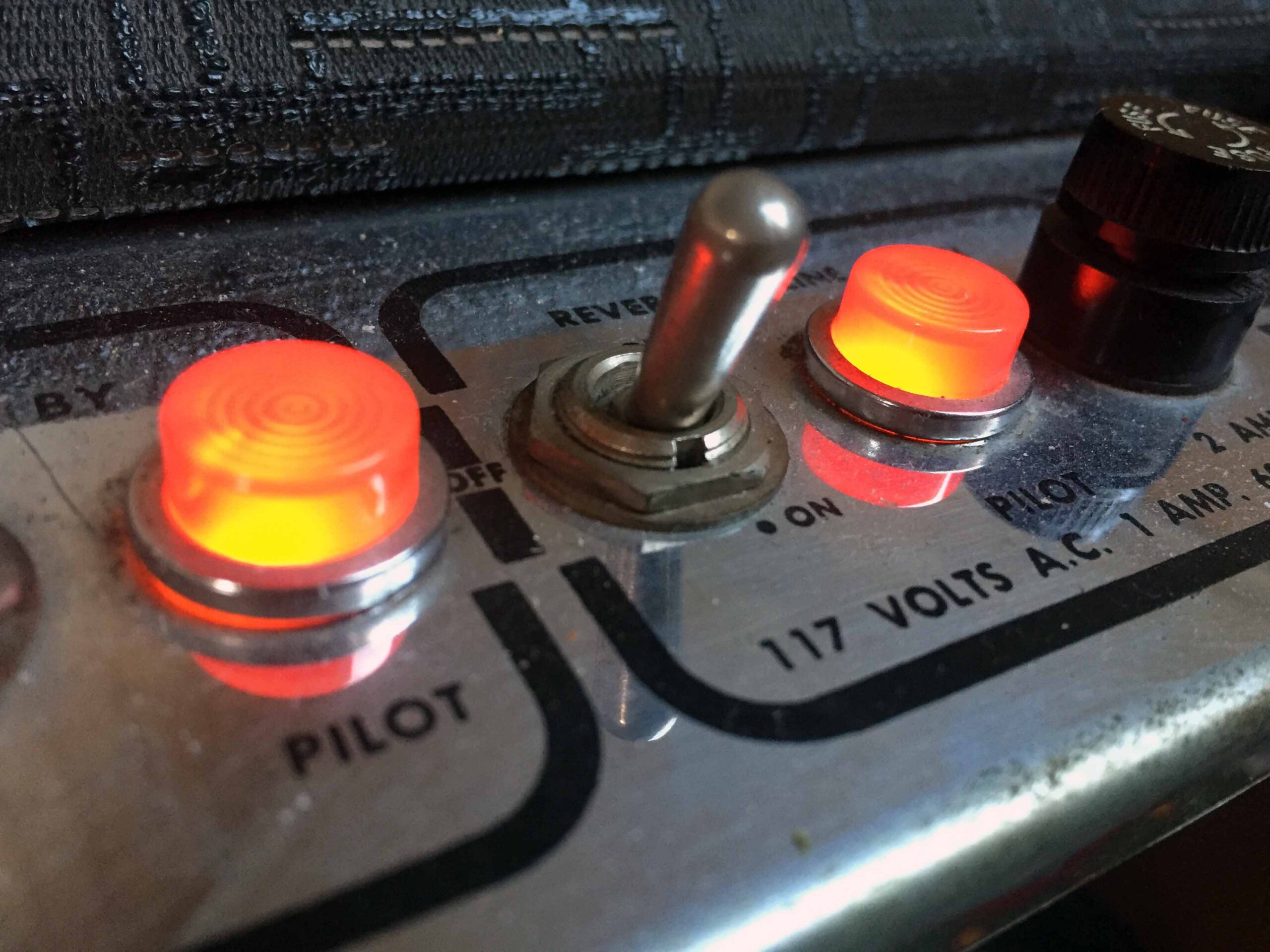 The 6162s main chassis, with the control panel, only houses preamp circuitry. Transformers and power-amp are located in a smaller, separate chassis on the bottom of the cabinet. Electricity of various voltages is channeled back and forth between the two chassis via a multi-stranded cable. The audio signal, very sensitive to disturbances of course, is transferred from preamp to power-amp through a separate, shielded wire. Since the power amp by itself  displayed little hum, I decided to trace the signal back to the preamp along that shielded wire, to find out where all that hum was introduced.

That task was easier than I thought. Between preamp and power amp, the audio signal splits and one branch is running all the way up to the top of the chassis, to the standby switch. That standby switch is really a mute switch. At standby, it channels the audio signals to ground, but leaves everything else running at full throttle. Simultaneously, that venerable little neon light is switched on… which runs on 117V AC. So, there you have a major source of hum and a very sensitive audio signal connected to the same switch, how about that! After some trial and error, I found a quieter way to wire that switch, but in the end, the best solution was to rewire it AND disconnect the mains voltage from the switch. No more neon, no more hum!

My preference would be to leave the circuit original and just swap the reverb tank. I found a small vintage Accutronics tank with two springs that sounded pretty good to me with the 6162. However, when demonstrating the amp to the owner, he indicated that he favored the longer reverb time of a brand new Accutronics unit. Some electronic changes would be needed to tame the copious amounts of reverb that it produced. You see that these things are very subjective!

After this small tune up, the amp certainly meets my personal standard of being quite addictive to play. I really hope the owner will be happy with the results too! The amp sounds best with single coils, but also handles humbuckers well with the treble input. Might it be possible that, with regular use, the old filter caps regenerate themselves? Finally, I have become quite curious how this amp would sound with FilterTron pickups! 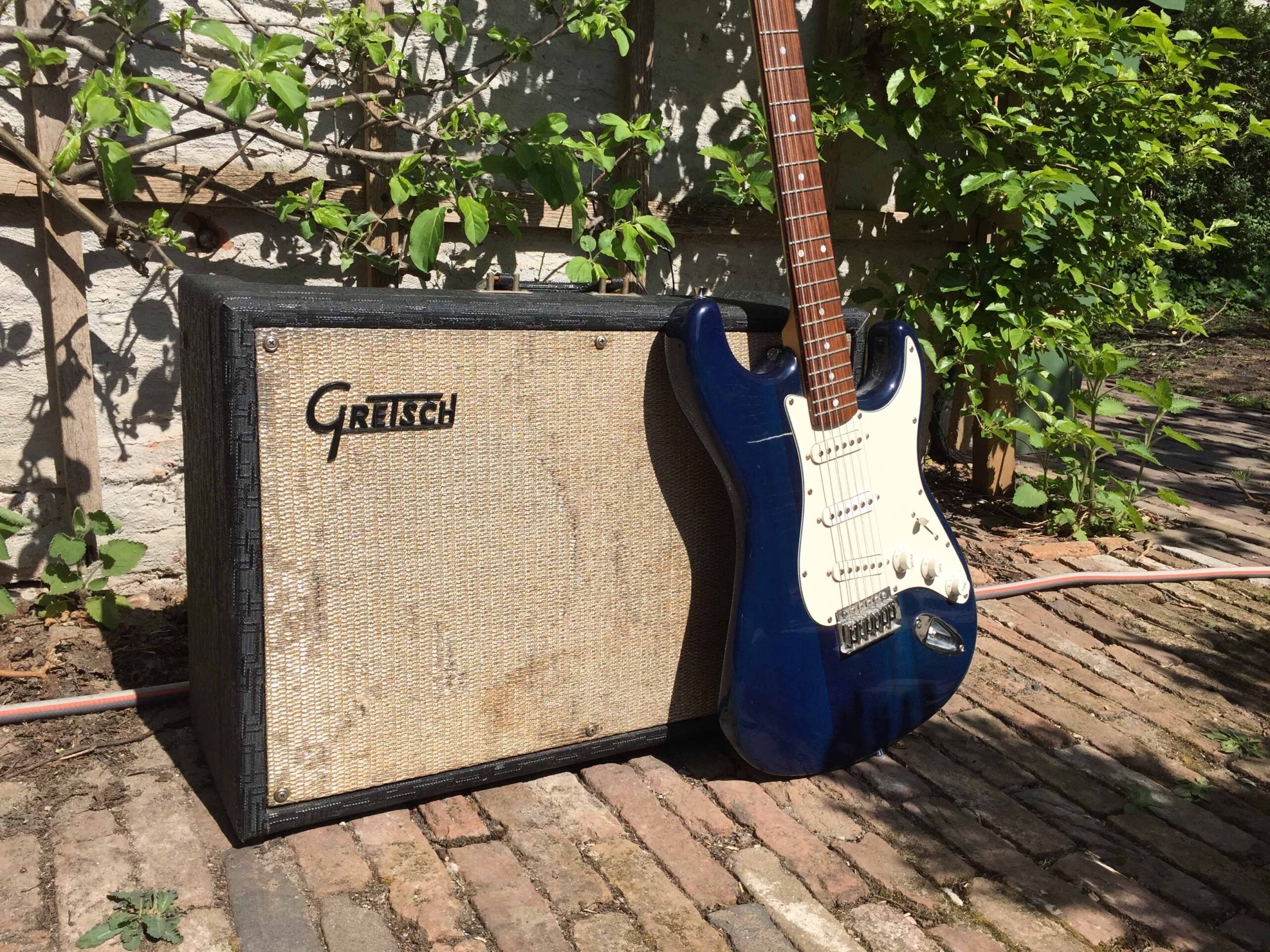 Battery-powered #guitaramp saves my day now that this event is to be held outside on a farm, because of the #Corona crisis.

“All the blues greats took chances.”

@dusttodigital Brilliant, but a bit wild for the Netherlands in the early 60s, so they moved to Germany. Not so much audible in this clip, allegedly, they used Echolette tape echo’s, to get a reverb-drenched sound, and amps of the same brand for their vocals. https://cosmicampworks.com/1963-echolette-showstar/

Any cookies that may not be particularly necessary for the website to function and is used specifically to collect user personal data via analytics, ads, other embedded contents are termed as non-necessary cookies. It is mandatory to procure user consent prior to running these cookies on your website.